Most discussion af the CAT Meeting at Holy Rood Church on February 10 centred on the concept of a Strategic Growth Area – the circumstances and conditions under which housing might be permitted in the Strategic Gap between Stubbington and Fareham.
Briefly. Fareham is not proposing to allow building in the Strategic Gap to meet its share of regional housing targets set by the Government; but it might be required do do so if neighbouring councils can’t meet their shares.
But residents were given a misleading impression of the nature of the Strategic Gap itself, as proposed in Fareham Today, and the fuller Draft Local Plan Supplement 2020 which is available on the Council Website.
The Council Leader stated that no permissions for housing had been given in the Strategic Gap. But he failed to mention that the Gap described in the draft 2020 Local Plan is already smaller than that under the existing Local Plan, adopted in 2015.
In October 2017, Fareham’s Executive approved a a new draft plan, which moved the boundary of the Strategic Gap westwards, allowing the provision of up to 475 homes between the Borough boundary and the newly-built Newgate Lane South. 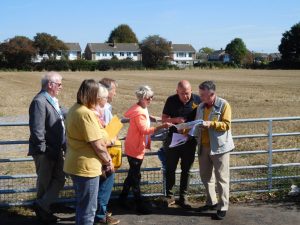 The draft should have been put to the Council for endorsement after a 6-week consultation period. But in November 2017 the Government consulted local councils on a new planning framework, altering the rules for provision of new housing.
Fareham’s draft plan was rendered out of date, so instead of adopting it, the December 2017 meeting of the Council adopted a Corporate Strategy including the preparation of a new local plan.
That preparation has been going on ever since, resulting in the 2020 Draft Plan which residents are now being consulted on.
So the proposed reduced Strategic Gap which we are now being asked to approve, is based on a draft plan which was never fully implemented.
Stubbington Councilllor Jim Forrest is having regular briefings from Council officers about the 2020 Draft Plan.
Jim says: “I’m determined to protect the Strategic Gap, which is vital to preserve the village character of Stubbington and Hill Head, and the country town character of Fareham as a whole.
“And I’ll assert that the proposed 475 homes alongside Newgate Lane should still be up for debate rather than treated as a done deal.”