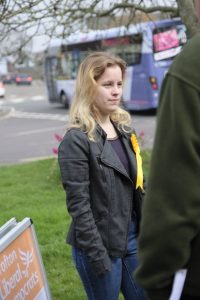 Sophie in the village chatting with residents

Sophie Foster-Reed, Alex’s stepdaughter, is also standing as a Lib Dem candidate in Sarisbury Ward in the Fareham elections. Her uncle, Clive Foster-Reed, is also a Lib Dem Councillor in Gosport.

Sophie is an A-Level Student studying Government and Politics, at Bay House Sixth Form. I plan to read “Politics and International Relations” at University this autumn; either at Sheffield, Exeter or Southampton, depending on the result of this election.

You may have met Sophie, as she is not only when door knocking to meet residents in Sarisbury for support, she is also been supporting Alex and Jim in Hill Head and Stubbington. She has been out knocking on doors and standing in the village on a Saturday morning.

The Lib Dem team in Crofton wish her all the best in her election.